Boys in the Boat by Daniel James Brown. (aka the other Dan Brown…) To get us in the mood for Rio we will read about the “Epic Quest for Gold at the 1936 Berlin Olympics”. With ties to other pre-WWII reads (e.g. Beasts in the Garden), I am sure we will have much fodder for discussion. To get a sneak preview of the book as well as learn about Katherine’s other two suggested reads see below: 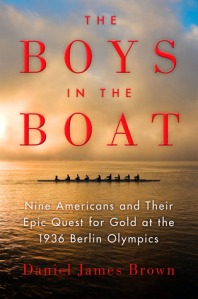 For readers of Unbroken, out of the depths of the Depression comes an irresistible story about beating the odds and finding hope in the most desperate of times—the improbable, intimate account of how nine working-class boys from the American West showed the world at the 1936 Olympics in Berlin what true grit really meant.

Before the Fall”,  Noah Hawley
An Amazon Best Book of June 2016: Noah Hawley’s new novel begins with the crash of a private plane carrying some very influential people on board. The only survivors are the young son of a media mogul and an obscure painter who, given his less than elevated status, seems like a wild card from the start. What happened on that flight? Why did the plane go down and if it was intentional, who was the target? With each chapter of Before the Fall, Hawley peels back another layer of the lives of those onboard that fatal flight meanwhile, the media speculation and accusations in the days after the crash threaten to overwhelm truth and decency. The end is surprising, even a little bit of a “huh.” moment at first, but it’s an ending that sinks in and starts the wheels turning on everything that came before it, which, to me, is the hallmark of an unforgettable story. –Seira Wilson, The Amazon Book Review
“The Life We Bury”, Allen Eskens
For the past few years, Seventh Street Books has had an incredible knack for finding new talent. Terry Shames and Mark Pryor are just two names they’ve introduced to the genre. With The Life We Bury, Seventh Street introduces a new author to watch, Allen Eskens.
The plot of The Life We Bury is something akin to a good Grisham-style thriller. Joe Talbert, a poor Minnesota University student with an autistic brother and alcoholic mother from hell, is assigned to do a biography on someone for his English class. To make the piece stand out, he chooses Carl Iverson, a man living the last days of his life in nursing home with pancreatic cancer after being imprisoned over thirty years for the rape and murder of a fourteen-year-old girl. Joe is skeptical about Carl’s claim of innocence, although the old man admits to have both “killed and murdered” in his life, but with the help of Virgil, Carl’s buddy from Vietnam, and his inquisitive neighbor, Lila, he uncovers truths that could both substantiate those claims and cause considerable danger for Joe and his friends.
In his debut, Eskens shows his skill as a storyteller. The pacing could be set to a metronome and the style is clean and accessible. He finds fresh takes on puzzle pieces for the story and knows when to present them.
More than anything, he gets us involved his characters, not just Joe and Carl, but those around him. He even brings life to the victim. He is unafraid to take time from the plot and look into the lives of his people, realizing they will be dealing with the messiness of their day to day and past  as well as mystery. It makes the reader truly care for them when those lives are threatened.
Allen Eskens is a perfect fit for Seventh Street. He writes a smart, fresh mainstream thriller that knows how to grab a reader. He also knows that character is key. Looks like they found another good one for us.

WINNER OF THE 2014 EDGAR AWARD FOR BEST NOVEL

“That was it. That was all of it. A grace so ordinary there was no reason at all to remember it. Yet I have never across the forty years since it was spoken forgotten a single word.”

New Bremen, Minnesota, 1961. The Twins were playing their debut season, ice-cold root beers were selling out at the soda counter of Halderson’s Drugstore, and Hot Stuff comic books were a mainstay on every barbershop magazine rack. It was a time of innocence and hope for a country with a new, young president. But for thirteen-year-old Frank Drum it was a grim summer in which death visited frequently and assumed many forms. Accident. Nature. Suicide. Murder.

Frank begins the season preoccupied with the concerns of any teenage boy, but when tragedy unexpectedly strikes his family—which includes his Methodist minister father; his passionate, artistic mother; Juilliard-bound older sister; and wise-beyond-his-years kid brother—he finds himself thrust into an adult world full of secrets, lies, adultery, and betrayal, suddenly called upon to demonstrate a maturity and gumption beyond his years.

Told from Frank’s perspective forty years after that fateful summer, Ordinary Grace is a brilliantly moving account of a boy standing at the door of his young manhood, trying to understand a world that seems to be falling apart around him. It is an unforgettable novel about discovering the terrible price of wisdom and the enduring grace of God.

When “Breath Becomes Air” will feature in next week’s July meeting. Katherine Owens is our hostess and she will be whipping up a summertime feast of chilled gazpacho and cheesy bread. Salads, fruit, apps, wine and dessert are welcomed. Please let us know if you can come and what you will bring.