Seems as though the week of 10/8 is a busy week for our crew, so I propose that we move our October meeting to the 1st (a week away!) or the 15th. Please select the date(s) to which you can attend (please select both if either date works fo you).  We will go with the date with the greatest attendance.

Feel free to add which date you prefer in the comments. 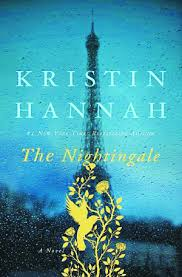 Grab your passports we are headed back to France! Our November read will be a historical fiction pick taking us to a familiar time -France circa WWII. See below for a brief synopsis of The Nightingale as well as two other suggested reads from Shirley.

Hannah is a popular thriller writer with legions of fans, but her latest novel, The Nightingale, soars to new heights (sorry) and will earn her even more ecstatic readers. Both a weeper and a thinker, the book tells the story of two French sisters – one in Paris, one in the countryside – during WWII; each is crippled by the death of their beloved mother and cavalier abandonment of their father; each plays a part in the French underground; each finds a way to love and forgive. If this sounds sudsy. . . well, it is, a little. . . but a melodrama that combines historical accuracy (Hannah has said her inspiration for Isabelle was the real life story of a woman who led downed Allied soldiers on foot over the Pyrenees) and social/political activism is a hard one to resist. Even better to keep you turning pages: the central conceit works – the book is narrated by one of the sisters in the present, though you really don’t know until the very end which sister it is. Fast-paced, detailed, and full of romance (both the sexual/interpersonal kind and the larger, trickier romance of history and war), this novel is destined to land (sorry, again) on the top of best sellers lists and night tables everywhere. — Sara Nelson

Other Suggestions from Shirley:

The Rosie Project (2014), by Graeme Samson – several of our friends from college have read this one in their book clubs, and said it’s hilarious.  A romantic comedy about a socially challenged professor who decides he needs a wife.  Reviewers use the term Aspergers to describe him, although the book does not.  There is a new sequel out as well, and one book club read both, but I thought that was too much for us.

Circling the Sun (2015), by Paula McLain – an historical fiction memoir, based on the life of Beryl Markham, an aviator involved in a love triangle with Denys Finch Hatton and Karen Blixen (who wrote her own memoir, Out of Africa).Another strong woman story, taking place in Kenya in the 1920s.  This author also wrote “The Paris Wife”, which was well written but drove me nuts because of the main character’s passivity as roles for women evolved in the 20s.  Markham sounds like a less passive character for sure, although still having relationship “issues”…

Looking forward to leading the discussion of “Americanah” and even more so to the margaritas and enchiladas prepared by Kim H.

Check back early next week for discussion questions on the book. In the meantime let us know if you can come and what you will bring.